 503.672.9245
✉ info@softwaretechnology.com
Who We Are
Senior level geeks, ninja warriors and jedi masters

The Software Technology Group was created in 1992 as a means to provide expert Project Consulting to the high tech arena. Our first work was in creating an emergency protocol for dialysis machine software (Double Pump Single Needle) in which both the pushing of fluid and the pulling of fluid was accomplished through the same needle.

From there it moved to other realms of the software arena (Manufacturing, Biomed, Government and Law, Bleeding edge High tech, …) in which the industry was less relevant, but the software was a versatile tool. And the concept was, as with all good engineers, the best tool for the job is the tool you use for the job, and from early on our expertise has been broad and deep.

We are an employee driven company. We have used and sometimes still use contractors, but for the:

… employee solutions offer the best of all worlds.

We have over 25+ years of experience of the entire project lifecycle.

Our motto: if it’s software we can do it.
Our credo: STG, where the project is king.
Our mission: To take on projects, to embrace our patrons through the process, and to succeed from both an engineering and business perspective.
Our mantra: if it’s not enjoyable then we’re doing something wrong. 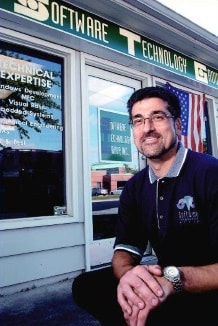 Mr. Abramovitz’ present role is at the helm, offering management and assurance of project quality and completion.

The company was formed in 1992 with the initial project to enhance a medical software machine to allow an emergency support protocol.

Since then the company has grown organically and in 2009 the company was partially bought by Boeing. Mr. Abramovitz became a Director and brought over 18 programmers and engineers to develop Unmanned Air Vehicles. The Software Technology Group continued to operate during this period and Mr. Abramovitz returned to re-invigorate STG in 2011.

Since then the Software Technology Group has expanded from one building to three and has continued to grow organically.

Between our three buildings at the Software Technology Group we wish to make our engineers safe, and came up with our “Engineer Crossing” signs.

To date, we have not lost a single engineer